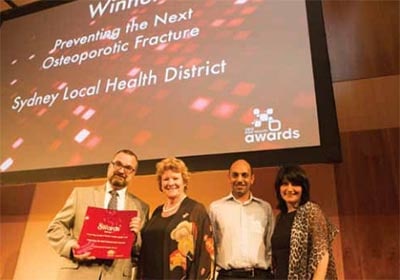 Significantly, their research has led the Sydney Local Health District to establish an innovative integrated Fracture Liaison Service at Concord Hospital’s Department of Endocrinology and Metabolism.

The Hon. Jillian Skinner, Minister for Health, presented the award to the members of the ANZAC Bone Research Program and the hospital’s Department of Endocrinology at a ceremony in October.

The project had its origins in 2003 when Markus Seibel and an Honours student initiated an audit of patients admitted to Concord Hospital with osteoporotic fractures and discovered that although the fractures were repaired by surgery, there was no investigation of how the fracture occurred and no treatment to minimise the risk of another similar injury.

“Everyone had an X-ray but only 3% of patients got a bone mineral density scan which is an excellent test to define future fracture risk,” Prof Seibel recalled.

“Osteoporosis was basically ignored. So in May 2005 we established a Fracture Liaison Service with the purpose to identify, investigate and properly manage patients who presented to Concord Hospital with a recent minimal trauma fracture.”

In 2010 Drs Lih and Ganda and Prof Seibel analysed data from about 250 patients and compared the results to those from some 160 patients who had not taken up the opportunity, but were otherwise similar.

“While this was a non-randomised study and certain biases would naturally exist, our results were clear enough – re-fracture rates were 20% in the unmanaged group and only 4% in the managed group,” says Prof Seibel.

“Effectively, proper management of osteoporosis reduced the risk of re-fracture by up to 80%. Not only that, but we found the service and its interventions were highly cost efficient.

“A well-managed Fracture Liaison Service costs money. Our service is run by a doctor with some input from nursing staff, and we do blood tests, X-rays and a bone mineral density scan to identify those patients who require treatment, which usually consists of calcium, vitamin D and an anti-resorptive agent such as a bisphosphonate. All of that costs money but when you balance that against the cost of further fractures, in particular hip fractures, the service we deliver is peanuts compared with the follow on cost of further fractures. Just one example, a re-fracture has an average stay in hospital of 22 days. The direct costs are so large we don’t even have to take into account the indirect costs.”

The team put together a business case and the Sydney Local Health District agreed to establish and support a part-time position for a doctor to run the Fracture Liaison Service at Concord Hospital.

“If I’m not mistaken we’re the first hospital in NSW if not in Australia to have an institutionalised, integrated Fracture Liaison Service funded by the Local Health District,” says Prof Seibel.