Charcot-Marie-Tooth (CMT) neuropathy is the most common group of the IPNs. The syndrome affects both the motor and sensory neurons. CMT is a disabling disorder that afflicts 8800 Australians for their lifetime. It, therefore, has major economic impacts in terms of productive years lost and the requirement for medical, paramedical and pension support. Motor and sensory neurons represent a unique cell type with long axons (up to 1 metre) that require continuous maintenance from the cell body to the nerve endings. The breakdown of this maintenance leads to the dying back of nerve ends going to the extremities of the body and patients suffer gradual muscle weakness in the arms and legs as well as some loss of sensory nerve function.

Our CMT research team at the Northcott Neuroscience Laboratory, ANZAC Research Institute has been recruiting CMT, HSN and HMN families over 20 years. Through our association with the Neurogenetics Clinic at Concord Hospital and as the primary Australian centre for DNA testing of inherited peripheral neuropathies we have over 700 families documented in one of the largest IPN databases in the world.

Our research group has expertise in genetic linkage studies and using state of the art genome technologies for gene discovery. The overall aim of our research is to discover new genes causing CMT and to understand the underlying pathogenic biology causing the demise of the motor and sensory nerves in CMT families that do not have mutations in the known genes. By understanding the disease mechanisms this may lead to the development of treatments and therapeutic intervention for CMT. Many of our gene discoveries have been developed and implemented for diagnostic testing.

Our team is actively recruiting new families and individuals to participate in our family studies. For further information in participating in our research, please contact Khim Perkins on (02) 9767 6796 or email mailto:northcottinfo@anzac.edu.au

The projects below showcase our current research to identify new genes and develop cell and animal models for CMT. 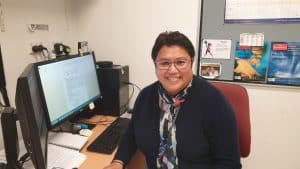 Whole-exome sequencing (WES) is a powerful approach which utilises the power of next generation sequencing (NGS) to identify very rare variants in approximately 1% of our DNA that codes for proteins. This strategy of gene mutation identification is very useful for families with CMT as many of the mutations identified in genes causing CMT have occurred in the protein coding portion of the DNA. With this WES we have the ability to sequence over 20,000 genes in a single sequencing experiment. By sequencing key individuals in small nuclear families we can identify all the possible DNA changes in genes for these individuals and then determine which variant is the disease-causing mutation. Using WES we discovered and validated PDK3 (PMID:23297365) and MORC2 (PMID:26659848) as the genes responsible of CMTX6 and CMT2Z, respectively. In collaboration with colleagues at the University of Malaya (Dr Azlina Ahmad Annuar and Dr Nortina Shahrizaila) we have used a combination of gene mapping and WES to identify AHNAK2 gene as a new cause of recessive CMT in a Malaysian family (PMID: 31011849). 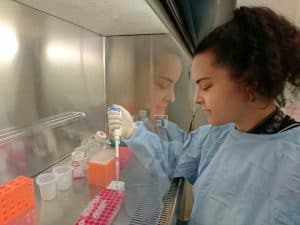 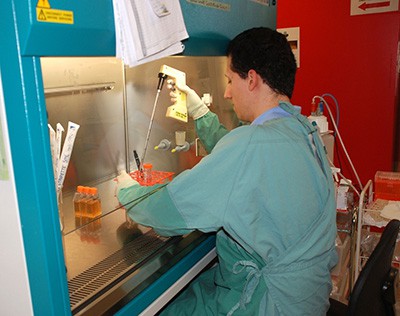 Although over 80 genes with coding mutations causing IPNs have been found, up to 50% of families remain unsolved after whole exome sequencing. As no mutations can be found in the coding DNA of these unsolved families, they are likely due to point mutations in non-coding DNA or structural variation (SV). SVs can include copy number variation (CNV), insertions, inversions and translocations. Our research has shown that SVs cause IPNs by disrupting gene regulation.

We have identified large DNA insertion re-arrangements leading to gene dysregulation as a cause of two different IPNs: X-linked Charcot-Marie-Tooth neuropathy (CMTX3) caused by a 78 kb insertion (PMID: 27438001) and distal hereditary motor neuropathy (DHMN1) (PMID: 27487800) caused by a 1.35 Mb insertion. In contrast to single base changes and small insertion and deletions (indels) which account for the majority of known IPN mutations, our discoveries involve thousands to millions of base pairs and was considered ground breaking by showing a new pathogenic DNA mechanism for IPNs. If SVs causing gene dysregulation proves to be a relatively common cause of undiagnosed neuropathies, this will represent a potentially treatable group of IPNs. We have re-programmed patient skin cells to motor neurons using induced pluripotent stem cell (iPSC) technologies for these families. The iPSC motor neurons are allowing us to investigate gene dysregulation in patient nerves using the natural mutation and genetic background derived from the patient’s own tissues. 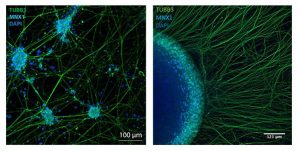 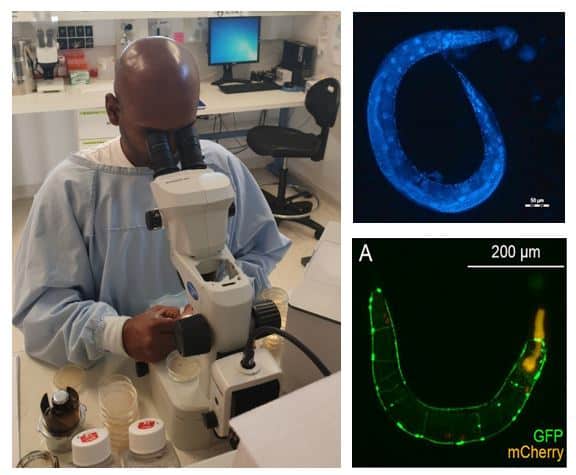 At The Northcott Neuroscience Laboratory we are now using worm technology as a possible fast track screen for drug therapies for degenerative disorders of nerve. Caenorhabditis elegans (C. elegans) is a small (about 1 mm in length), transparent nematode with a short life cycle and a well characterised nervous system – making them ideal for studying axonal degeneration caused by genetic mutations found in patients with inherited peripheral neuropathy.

The current program is using a plethora of models from overexpressing human neuropathy gene mutations to mimicking the human gene mutation changing the same single base pair change in the worm gene. To observe any changes we look at the worm’s GABA-motor neurons which innervate the muscles that control worm locomotion. Gene variants that are pathogenic are expected to cause axonal degeneration as evidenced by abnormal locomotive behaviour and disrupted axon structure (observed visually by the endogenous expression of green fluorescent protein in the GABAergic neurons). This project complements our current gene discovery program by providing additional in vivo evidence as to whether a candidate gene mutation is the cause of inherited peripheral neuropathy in our patients. In collaboration with Dr Brett Neumann (Monash University) we will continue to develop a comprehensive C. elegans program for ongoing IPN gene mutations discovered. The models established in this project will be used for downstream functional studies and therapeutic drug screens. 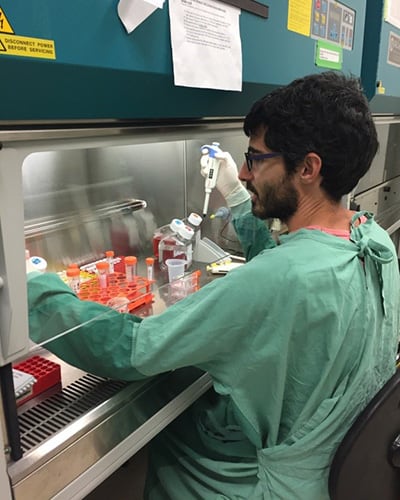 Our group has a cell biology program for the study of mutations causing inherited peripheral neuropathies. Understanding the normal function of the genes associated to IPNs and the consequences of the mutations identified in these genes in neuronal cell lines, will further our understanding of the mechanisms causing degenerative nerve disease.

Two of the main projects currently developed in our lab involve the study of PDK3 and ATP7A mutations, previously identified by our group as causative disease mutations of two forms of X-linked forms of inherited peripheral neuropathy.

Using patient skin cells with the PDK3 gene mutation we have recently identified a highly potential ‘druggable’ target for therapeutic intervention (PMID: 27388934). We have also successfully developed a knock-in mouse model that expresses one of the two human mutation previously identified in our laboratory in the copper transporter ATP7A (PMID: 27293072). This model faithfully recapitulates the defective molecular events observed in the human patient fibroblasts. We believe this model represents an ‘early stage’ of motor neuropathy prior to the dying back of the nerves and will facilitate identification and testing of therapeutic targets to develop effective copper based therapies that could ameliorate or prevent progression of the disease.

Our group has also developed iPSC motor neurons derived from patients harbouring the PDK3 and ATP7A mutations to further in our understanding of how mutations in these genes cause degeneration of axons. These patient-derived neuronal models will be also utilised to screen for drugs that can revert disease-specific phenotypes. 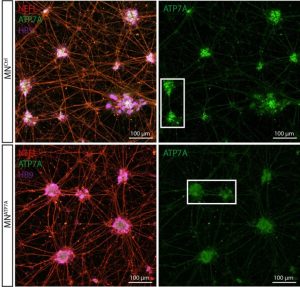 The motor neurons are nerves that extend from the brain to the muscles and provide the stimulus through which we move, breathe, eat and drink. The motor neuron diseases (MND) are a group of related neurodegenerative diseases that cause the progressive death of motor neurons. These diseases range from slowly progressive, non-fatal forms (distal hereditary motor neuropathy DHMN) to the rapidly progressive fatal disorder amyotrophic lateral sclerosis (ALS). ALS typically leads to death within 3 to 5 years of first symptoms. ALS causes progressive paralysis and the cause of death is usually respiratory failure.

The Northcott Neuroscience Laboratory has been at the forefront of MND discoveries for many years including the TDP43 gene. Protein expressed by this gene is found in all dying nerves in MND. Abnormal accumulation of TDP43 has become a hot topic in MND research, since correcting this phenotype represents a feasible therapeutic approach to treat ALS. Work on ALS in collaboration with Macquarie University’s motor neurone research group has continued where Professor Nicholson has mentored both the Genetics group and the Zebra fish group.

Professor Kennerson is now collaborating with several colleagues to study both DHMN and ALS. We propose that understanding the differences between fatal and non-fatal forms of motor neuron disease will help to identify therapeutic targets for pre-disease intervention. Through a Sydney Southeast Asia Centre (SSEAC) Partnership Grant, Professor Kennerson and colleagues at the University of Malaya (Professor Nortina Shahrizaila and Dr Azlina Ahmad-Annuar) are studying ALS in the Malaysian population. Work also continues to find new gene variants causing non-fatal forms of motor neurone disorders in families attending our neurogenetic clinic by using next generation DNA sequencing. Genes causing motor neurone disorders can sometimes be severe and life threatening and may play a role in the fatal forms of MND. Professor Kennerson is also collaborating with Professor Steve Vucic as a Sydney Health Partners initiative to examine neuronal excitation in both ALS  patient derived iPSC motor neurons as well C. elegans models. 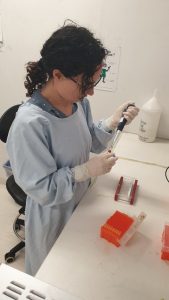 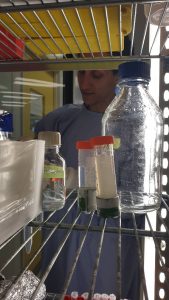