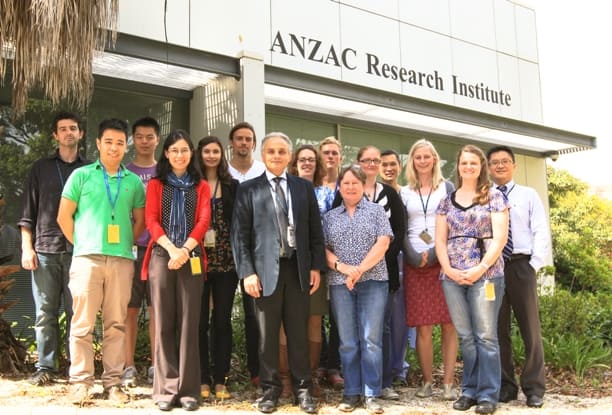 research in 1999 at the University of Leiden in The Netherlands. She moved to Australia to join the laboratory of Prof Kritharides at the Heart Research Institute, where she started investigating protein secretion and cholesterol metabolism in macrophages. This work continued at the University of New South Wales and she now is at the ANZAC Research Institute were she manages the Atherosclerosis Laboratory and runs several in vitro cell-based studies as well as animal projects investigating processes involved in atherosclerosis.

Dr Mathew Traini was awarded his PhD from the

University of New South Wales for the development of a functional genomics platform for screening and identifying genes involved in the aggregation of proteins in Alzheimer’s Disease. Since then, Dr Traini has applied his interests in genomics and biochemistry to cardiovascular disease and atherosclerosis. A major research focus is the discovery and characterization of novel enzymes involved in the transformation of macrophages into cholesterol-loaded foam cells, particularly those related to inflammatory and purinergic signaling pathways. Dr Traini is also examing how the physiology of apolipoprotein E, a crucial lipid-transporting protein in the blood, is affected by glycosylation and other post-translational modifications in disease and in health.

(Biochemistry) in 2007 from the University of Ottawa (Canada). Her work focused on the interaction of macrophages and synthetic biomaterial surfaces, particularly in the area of inflammation in response to polyurethane biomaterials used in cardiovascular implant materials. After a year with the Tissue Engineering and Microfluidics group at the Australian Institute for Bioengineering and Nanotechnology (University of Queensland), she joined the Macrophage Biology Group (UNSW) and has been with this group since, including their recent move in 2013 to the ANZAC Research Institute as the Atherosclerosis Research Group.

More Information on the Atherosclerosis Program...