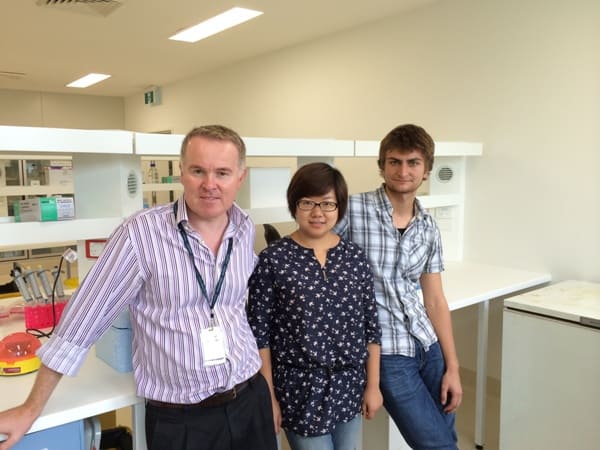 Mark Cooper studied Physiology and Medicine at the University of Oxford, UK. Specialist training in Endocrinology and General Medicine was at the University of Birmingham, UK where he also completed a PhD in Medical Sciences. At the beginning of 2013 he moved to Sydney to take up the position of the Professor of Medicine at Concord Repatriation General Hospital. In 2011 he was awarded the Bertram Abrahams Lectureship in Physiology at the Royal College of Physicians of London. He collaborates extensively with other research groups within the ANZAC Research Institute and also with the endocrinology, respiratory and rheumatology research groups at the University of Birmingham where he is an Honorary Senior Research Fellow.

Dr Jinwen Tu obtained her PhD (Biomedicine) in 2014 from the University of Sydney. Prior to this she completed her Master’s project investigating osteoinductivity of mesenchymal stem cells on a novel scaffold using mouse and rabbit’s models. Her PhD thesis work investigated the effects that the body’s own glucocorticoids have on chondrocytes, the cells that line the surface of our joints. She has explored the effects of glucocorticoids on normal cartilage and bone development, as well as in conditions such as fracture healing and arthritis. This work indicates that chondrocytes have important functions that were not predicted previously but could be targeted therapeutically. Dr Jinwen Tu joined the Adrenal Steroid Lab in October 2013. Since then, she has examined the role and regulation of local steroid production in the development and persistence of rheumatoid arthritis, including its possible role in bone and cartilage damage during joint inflammation.