With the start of the Second World War and other conflicts including those of Korea, Vietnam, Afghanistan and Iraq; ANZAC Day has been expanded to include remembrance of all servicemen and women who have given so much to Australia. A statue stands outside the ANZAC Research Institute based on George Silk’s famous photograph of a Panuan man leading a wounded Australian solider. The photograph was taken on Christmas Day, 1942, and has come to represent the sacrifice of Australian military personnel during the Second World War, and the mateship of the ‘Fuzzy Wuzzy Angels’. The angels were Papuan volunteers who assisted in guiding soldiers to safety along the trail. The wounded private depicted in the statue is George Whittington, and the Papuan man assisting him is Raphael Oimbari. This statue stands as a monument of the great legacy of ANZAC service and sacrifice. 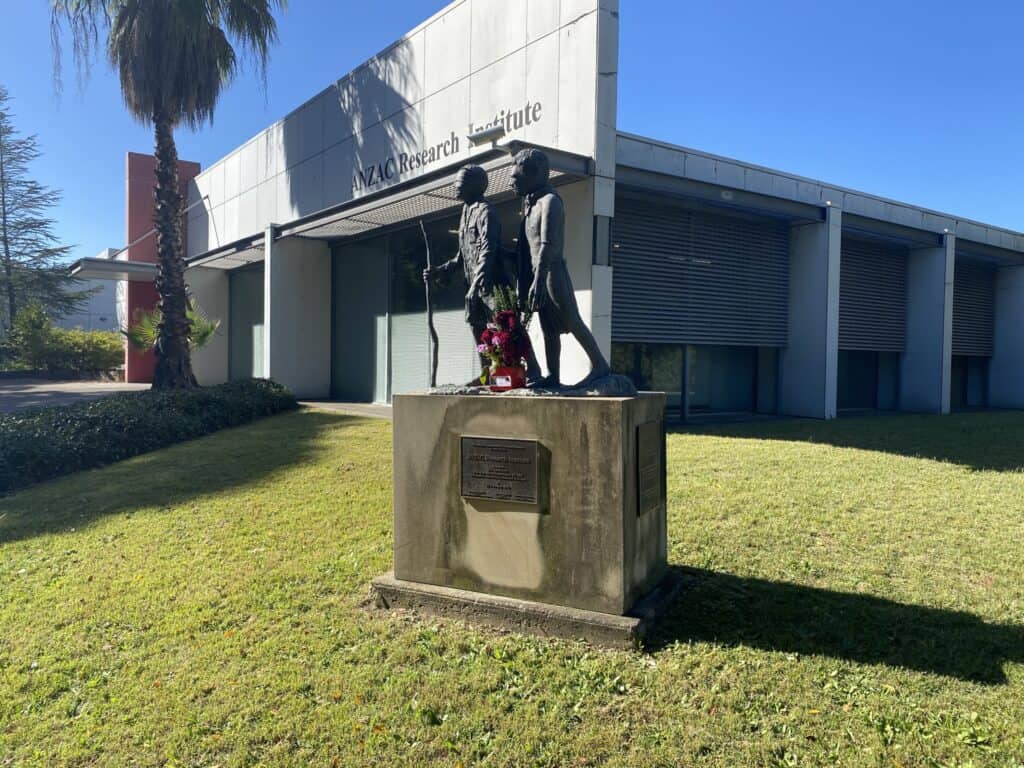 (Statue outside the ANZAC Research Institute, based on a George Silk photograph)

“Lest we forget” is a phrase commonly used as symbol of commemoration in Australia on ANZAC Day and Remembrance Day. It is a line from the 1897 Rudyard Kipling poem “Recessional”:

‘God of our fathers, known of old,
Lord of our far-flung battle line,
Beneath whose awful hand we hold
Dominion over palm and pine—
Lord God of Hosts, be with us yet,
Lest we forget—lest we forget!’

At ANZAC Day ceremonies, after the speaker recites the Ode of Remembrance:

They shall grow not old,
as we that are left grow old;
Age shall not weary them,
nor the years condemn.
At the going down of the sun
and in the morning
We will remember them.

Then those attending will usually repeat the words, ‘We will remember them’ followed by a short pause and then ‘Lest we forget’. These traditions carry rich symbolism and allow us to turn our minds to the sacrifices offered for the country and freedoms we enjoy. This ANZAC day, the ANZAC Research Institute also joins in this tradition:

We will remember them

The health and medical ANZAC Research Institute was named after and in remembrance of the ANZAC tradition. It’s mission is to provide leadership and excellence in health and medical research activities throughout Australia, with a focus on aging, to improve the future health and medical care for the Australasian community. In so doing, the Institute will provide a lasting legacy to the veterans and their families who have created the society we have today.

Donate to the ANZAC Research Institute.